During the 1870s the crossing of the Qu’Appelle River north of Wolseley was know as the Racette’s Crossing. It was named after a local servant of the Hudson Bay’s Company. This was part of the Carlton Trail which connected the Red River Colony to Fort Carlton. The area just south of the crossing was settled by Joseph Hoskins Ellis from Guelph, Ontario in 1881. He became the first postmaster in 1883 and the town was named after him. In 1893, the first school was built in Ellisboro. A Presbyterian church followed in 1894. The Anglican church was completed in 1897 and the original hall in 1899. There was also a store in town built in 1883. Ellisboro boasted Saskatchewan’s first rural high school, the brick house. It operated from 1934 to 1944. I could not find information on population or the reasons for Ellisboro’s decline. However it appears no rail line passed through the town, a great disadvantage for a prairie town. The elementary school closed in June 1952, the Presbyterian church in 1961, and the post office in 1969. The Anglican church used to have a bell tower. I assume it was not replaced after the roof was redone. If you have any information on Ellisboro, please leave a comment! 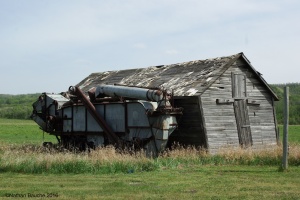 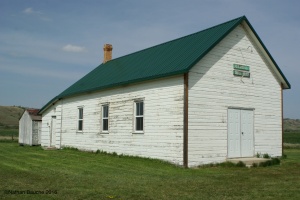